My deepest apologies for my tardiness in writing this post – All I can say is that the holiday season was a tad hectic! As you can see from the photo, many of the items have been devoured leaving only the packages as ghosts of goodies past. 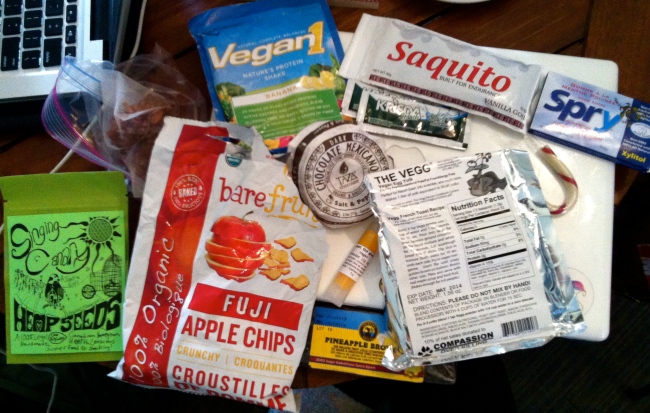 This month I received a great box in the Vegan Food Swap that included local goods as well as gems from distant lands. The Vegan Food Swap creator herself, Meshell aka Vegan in Your City, was my December partner (lucky me!)

The TAZA chocolate with salt and pepper was a surprising win for my taste buds mmmm and it came in little circles that broke apart like pies. Ipanema Valley’s Pineapple Brownies are a definite favourite of mine – The only ingredients are pineapples and bananas but they only have 3 grams of sugar per serving (something in the processing)!

There are two protein powder mixes that I have never seen or heard of before (but both look delish) – Vegan1 Banana shake (from California) and Saquito Vanilla Goji powder (from Florida) – I’m so stoked to try them both but also tempted to save them for a while because I probably won’t be able to restock on them anytime soon!

THE VEGG – Vegan Egg Yolk – a very interesting egg replacer from Pennsylvania which smells very eggy and is super yellow in colour. I used it in pancakes the other day and it added very good flavour and texture. Next I’m going to try making a French toast (there is a recipe on the bag) to fully observe its flavour!

Bare Fruit apple chips are another fave of mine – I love that they don’t add preservatives, sugar or sulphites – and they aren’t fried or freeze dried so they’re just sooooo yum. Singing Canary Hemp Seeds have a very nifty package with hand drawn images and writing about the cannabis prohibition on the back – I’ve always wanted to grab a bag and now I have some!

There were also some Krisda water flavour packs, good ol’ Spry gum, a yummy candy cane and some interesting smelling tea bags (perhaps cocoa curls and some sort of bark? I have yet to taste them so we’ll see – but I love tea so I’m stoked!). Oh, and “just the goods” vegan lavender lip balm which smells tastes and feels sooooooooo good.

All in all, an insanely wonderful box. Thanks Meshell – you spoiled me! Ohhhh and it was wrapped up all pretty with colourful ribbons – I wish I had taken a photo before tearing it open, but alas, I was too excited!

One thought on “December Vegan Box of Wonderfulness!”